There was going to be a post tonight where I walked about genres of games, what I used to enjoy playing and figuring out what it is I like playing now, and want to try going forward. But that got interrupted by my postman bringing me 3 Wii games I got from ebay, and so now the post is going to be about new to me shiny things!

So, as suggested, I’m not entirely sure what I want or like playing anymore. And pretty much all the games I have for my Wii are exergaming which are great and all, but not for when you’re just in the mood and to sit and play a game, y’know? I figured new games were needed so I jumped onto ebay, and literally just sorted the Wii games from price, low to high, to see what jumped out at me.

And this is what I ended up with: 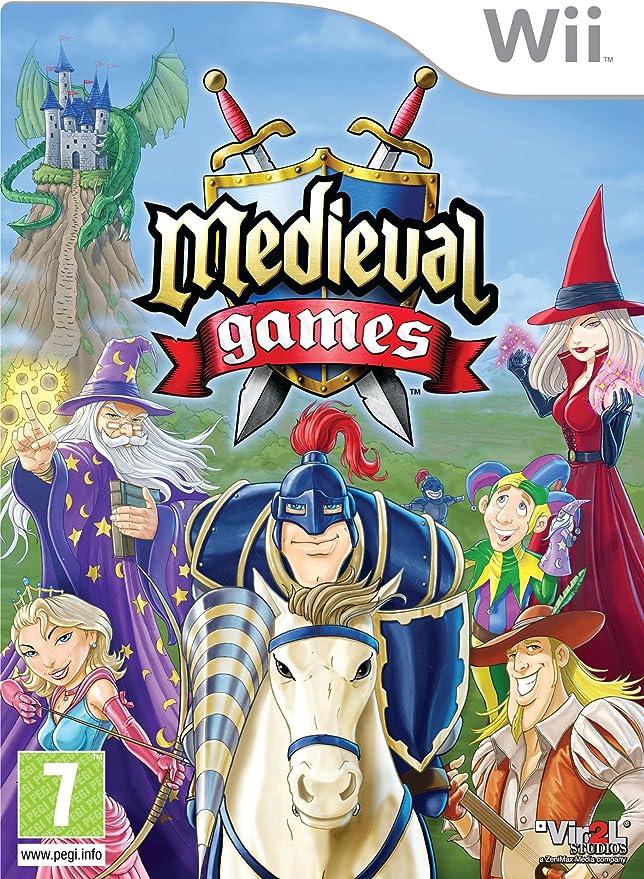 Medieval Games
The first Wii game set in Medieval Times!
30 unique Medieval minigames including sword fighting, jousting, archery, and catapulting
Challenge your opponents in fun competition modes like Free Play and Tournament
Compete across three distinct game board
Invite up to three friends to join in the fun with 4-person multiplayer action

Dive into the storybook world of Medieval Games! Battle dragons, storm the castle, or joust with up to three of your friends in a quest to become the tournament champion. Choose from eight iconic characters such as the Knight, Princess, or Wizard as you experience Free Play, Tournament, and Board Game modes. Good olde light hearted humour, easy pick up and play action, and addictive gameplay make Medieval Games a favourite for all families!

Honestly, they had me at jousting! I suspect this is going to be just the right level of terrible and I can’t wait to play it.
The internet tells me ‘Medieval Games received generally bad reviews after its launch. Some reviewers criticised the game’s bad motion controls and lack of depth and personality. Common Sense Media said that the control-scheme could only be enjoyed by an ogre, and was generally negative towards the game’ but how am I not supposed to love this?! 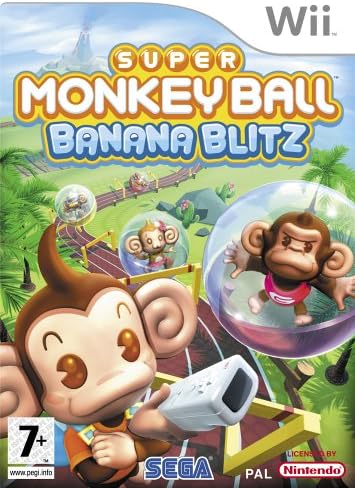 Super Monkey Ball: Banana Blitz
The monkeys are back to put the Wii Remote though its pacing, with more puzzles, more features, more party games and, most importantly, more fun (and bananas).

They’re monkeys, they’re trapped in giant hamster balls and, unlike the recent Super Monkey Ball Adventure, they’re super. This is Super Monkey Ball 3 in all but name, with the same mix of single player puzzles and party games as the original two games. As before the puzzle levels simply have you trying to navigate your monkey through a maze without falling off, except you don’t control the ball itself but tilt the whole game world around it. The big difference now of course is that get to use the Wii Remote, which is perfect for the extremely subtle movements necessary for game. New features include a jump command (either the ‘A’ button or by actually flicking the controller upwards) and a number of boss battles that will test your monkey-in-a-ball controlling skills to the limit.

As well as seeing the return of party game favourites such as Monkey Target and Monkey Race, Banana Blitz also features brand new concepts such as Monkey Fencing (where you jab into the screen with your remote) and Monkey Hurdles (where you have to pump the Remote up and down as if you were running). There are 50 party games in total and all use the Remote in a different way.

This was bought on the strength of the NAME alone. I didn’t care what it was about, I knew I wanted to play it. It looked and sounded crazy fun and I am a big kid at heart.

Find a partner, get married and raise a family!
There’s an array of livestock to choose from: cows, horses, sheep, chickens and many more
Take pride in beating your farming rivals in the fields and at the festivals
Interact with town folk and even befriend wild animals
Free the Harvest Goddess: collect lost notes to create a magical melody! Only by collecting a certain number of notes will the Harvest Goddess come back
Unlock hidden multiplayer games.

This… oh this is the game I’m most excited for! I’ve been wanting to play a Harvest Moon game for months. It’s one of the games Stardew Valley (which I’m COMPLETELY OBSESSED WITH) is based on and fuck knows I love me a farming sim. It looks like you can only have heterosexual pairings, which is a bit sucky but I know I’m going to have to have at least 3 farms – one of each type.

I’m also hoping to get a copy of Animal Crossing: Let’s Go to the City but keep getting outbid on ebay. I’ll get there I’m sure. And I really want to save up to get a Switch to play Animal Crossing: New Horizons but that’s a little out of my budget and financial priorities right now, sadly.

I won’t get time to play any of them tonight though. It’s date night and I believe Li and I are planning to spend some time on our co-op Stardew Valley farm.

A neurodivergent queer millennial (they/them) who sucks at video games but has thoroughly enjoyed playing them for over 30 years.